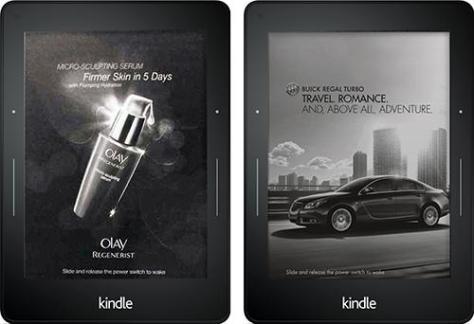 There has been a lot of mixed reactions toward Amazon putting advertisements on Kindle, especially when it was first launched in 2011. Today I wish to bring this issue back into the spotlight and invite you to re-examine it together.

In the article Why Advertising Could Become Amazon’s Knockout Punch, Joe Wikert attributes Kindle’s popularity partially to Amazon’s Special Offer, as it “lowered the price of the device” and presumably would not interfere your reading experience (which the advertisers find very reasonable and worthy of their money, of course).  Wikert then predicts that Amazon’s next step might be making money on in-book ads. He explains his theory by explaining Amazon’s wholesale model of publishing, and even goes on predicting that Amazon “would love to see ebook pricing approach zero” — which can be realised with in-book advertising strategy. All of this will eventually help Amazon “eliminate competitors” and obtain to market dominance”, as it has been doing in the past four years.

Jamie Lending takes a quite strong stance and describes Amazon Kindle Special Offers as a disgrace. “Unobtrusive” and “never in your reading experience”, says an Amazon spokesman in response to Lending’s complaint, but many readers still find the ad-free version irresistible despite the fact that they have to pay extra 30USD. While Amazon frames it as a Kindle user’s choice, Lending argues that the company takes away the “ultimate control” over ad exposure.

Kevin C. Tofel, in his article Ads on Kindle Fire HD tablets: Bad news or just business?, presents argument from both sides and comments that the subsidy of being able to control “is financial in nature”. Tofel’s opinion differs from Lending in the sense that he believes readers still retain some choice.

Is this really a question of whether consumers are willing to pay or whether they can afford it? And what exactly does it mean to publishers and authors?

Sharing is better than enjoying alone :)

17 thoughts on “Amazon, Ebooks, and Advertising”

Who can resist a great discussion? Let me know what you are thinking! Cancel reply

Plus ça change, plus c'est la même chose / The more things change, the more they stay the same